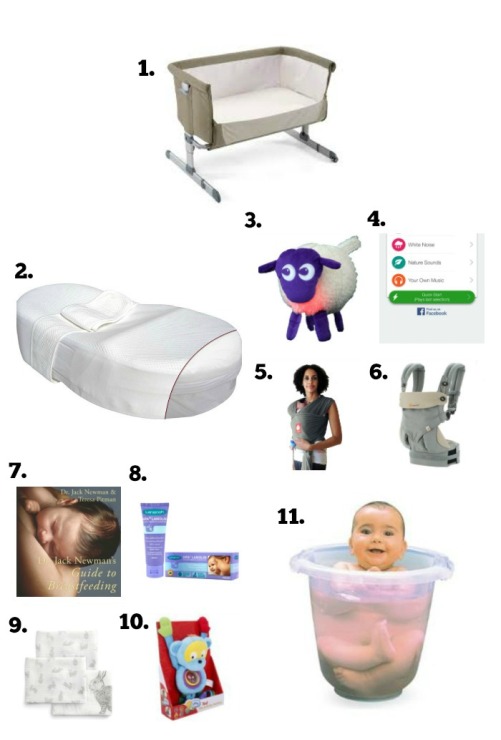 Ahh, having a baby. It’s up there with getting married in terms of sales peoples’ eyes lighting up with dirham signs, reading lists and lists of products that you simply MUST buy and feeling the pressure to make sure you’ve got everything before your little darling arrives in the world.

Here’s the secret though – really all you baby needs when they’re first-born is a pack of sleep suits or three (I’d buy one pack of tiny baby, one pack of newborn and one pack of 0-3 – unless you’re certain you’re going to have a whopper  of a child and then do a next.ae order when they’re born), a few vests, a few blankets, some nappies, a car seat and lots of cuddles.  There really is no need to spend an absolute ton on a cot or a buggy until later (if at all). Babies in Finland are given a cardboard box to sleep in, for crying out loud.

Having said that, however, there are a number of products that really worked for us and helped me no end as an extremely sleep deprived new mum. Every baby is different, there are no guarantees that they will work for you and they are by no means essential, but these are the bits I will be hanging on to for if and when there is a baby number two:

What? This was one of the first things we bought after I reached the 20 week mark of my pregnancy. I knew I wanted to sleep with my baby close to me, and I didn’t know any mums who had a good experience with successfully getting their baby to sleep in a Moses Basket. I had read up on the benefits of safe co-sleeping, especially when establishing breastfeeding or after a c-section, so investing in a co-sleeper cot like the Chicco seemed like a good idea. It’s not as expensive as other similar cots on the market, like the Snuzpod, but still allowed Maddie to be right next to me in bed at night and we also had the option to turn into a standalone cot during the day. Most of my parenting decisions are made due to the fact that deep down I’m extremely lazy, so it was an absolute god send when she was waking up every two hours to feed and I could pick her up without actually leaving my bed. I could also check she was still breathing simply by moving my head. The only downside to the Chicco was that Maddie grew out of it at around five months when she kept rolling into the sides and waking herself up.

Where from in Dubai? We got ours from Mumzworld.com. I’ve heard that they’re  also available at the Chicco shop in Dubai Mall, although they were out of stock when we went to buy ours.

How much? AED 919 new, or lots cheaper if you can get one second-hand. I’d advise getting a new mattress if you go down this route though as per SIDS guidelines. It’s expensive for something that your baby will only sleep in for the first six months or so, but the good news is that in Dubai there is a thriving second-hand market and demand is high so you will easily be able to sell it on for around AED 500 – 600 if it is in good condition.

What? If you’d told me when I was pregnant that in a few months time I’d end up spending a small fortune on what’s essentially a bit of foam, I would have told you to stop being so silly. But after six weeks of extremely broken sleep and a baby who spent the hours of 4-6am half asleep and grunting with gas pains without fail, I was desperate for something – anything – to help. That’s when the Cocoonababy dropped from heaven and entered our lives. Described as an ‘ergonomic cocoon which repositions the child in the semifoetal position she adopted in her mummy’s tummy’, the Cocoonababy basically ensured that Maddie’s legs were higher than her stomach to help her get all her trumps out. And helped us to get some sleep. I’ve heard it can help with reflux too. This isn’t a product for everyone (some babies prefer the Sleepyhead – others don’t need either) but for us it was a Godsend which also doubled up as a travel cot when we spent seven weeks in the UK over the summer. Don’t bother buying one until your baby is born as it’s a lot of money if he/she doesn’t have any problem farting. Also be warned that as soon as your little one can roll that’s it for the Cocoonababy. If only they made one in adult size.

Where from in Dubai? We got ours from JustKidding. I was so sleep deprived I barely remember buying it.

What? Oh Ewan, you little God of Sleep. Let me stroke your fluffy tail and drop into a deep slumber with you by my side. You’re basically just a (slightly ugly) cuddly toy with an ominous red night-light inside you, but because you can play a selection of different white noise sounds that mimic the womb you have the ability to help most babies I know fall asleep. And your arrival into our house meant that I could stop leaving my iPhone next to Maddie’s head blasting out  hoover sounds at night, meaning I could do important stuff again like, you know, check Facebook.

Where from in Dubai? Mumzworld.com

What? For when it’s not socially appropriate to be carrying around a cuddly sheep, the SleepySounds App is awesome. Hairdryer, hoover, rain, tumble dryer – it basically plays a baby’s top ten sounds for however long you want it to – and the good news is, unlike other white noise apps it allows you to still do other important stuff at the same time (like check Facebook). Useful if you have a desert baby like ours who will only go to sleep with the sound of heavy rain (weirdo) and you don’t want to take Ewan the Sheep on an outing to Spinneys.

Where from in Dubai? The app store.

What? We spent almost AED 3000 and many, many hours trawling malls looking for the perfect pram before our darling daughter entered this world. Low and behold, as soon as she was born she hated being in her bassinet for more than 10 minutes and just wanted to be up, cuddled and looking around (she is the most  inquisitive baby I have ever met).  Step forward the Hana Baby Wrap – basically a long, stretchy piece of material which you ‘wear’ your baby in. It’s fully breathable so perfect for Dubai. It was slightly scary learning how to put it on at first, but we managed it with the help of a few YouTube videos and soon became pros. As soon as we put Maddie in it for the first time after hours of yelling, her royal highness decided to nap contentedly in it for two hours.

Where from in Dubai? Luxe Carriers. Sarah, the lovely lady who runs this company, also runs a UAE Babywearing Group where she will help you learn how to put the wrap on safely, and try on other carriers and wraps too.

What? This was the next step on from the Hana Baby Wrap for us, purchased when Maddie was around 10 weeks old. I was comfortable with baby wearing by this point and wanted something that was slightly easier to put on and would see us through for a good few months. The Ergobaby 360 enables me to position Maddie in four different ways – facing towards me, facing out (which is her favourite – I told you she was a nosy baby), on my hip and on my back. It’s by far one of our best purchases – great for nipping to the shops, having her with me if she’s having a grouchy day and helps to get her off to sleep too.

Where from in Dubai? Luxe Carriers again.

How much? AED 645. I bawlked a bit at the price, but we use this product every.single.day and it’s been worth its weight in gold for us.

What? I’ve written about my breastfeeding ‘journey’ here and Jack Newman was one of my b(r)est friends throughout the rather tricky process of establishing feeding. His book is easy to access when you’re in a panic, has a calming tone of voice and easily explains stuff like breast compressions, engorgement issues and how to get a decent latch. Nowhere near as good as a face-to-face session with a lactation consultant, but worth having on the shelf incase there’s a waiting list to see one.

Where from in Dubai? I got a paper copy from Amazon.co.uk when I was back in the UK, but you can download one for Kindle too.

What? Another breastfeeding saviour, Lansinoh Lanolin cream is thanked by mums worldwide for saving their nipples from getting sore, dry and cracked. Even if you are lucky enough to have a baby who latches on perfectly straight away, the chances are your nipples won’t be used to having what feels like a small hoover attached to them 24/7 and so things can get a bit uncomfortable. I put this cream on before and after every feed and it really did help.

Where from in Dubai? Mumzworld.com

What? Muslins are esentially just bits of cloth, but when you have a baby they become the most useful thing ever. I was lucky enough to be gifted some gorgeous large ones from Mamas and Papas by a friend just before Maddie was born, and we still use them all the time for everything from providing an instant breastfeeding cover, to covering her pram whilst she naps, to cleaning up sick and snot. Glamorous.

Where from in Dubai? Mamas and Papas – who have just started offering a delivery service which is great news, although bad for the credit card. My mother-in-law also got me some lovely ones from Costco in the UK.

What? Meet Maddie’s first love. This little blue monkey captivated her with his big blue and yellow face, noisy belly and long velcro arms. We thought Ted was a rubbish name for a monkey, so we call him Marcel and he does a cracking French accent. He wouldn’t be everyone’s match on a lonely heart’s column, but Maddie bloody loves him. We have no idea why. All I know is that we ended up buying two incase we lost the original and I spent the best part of the summer waving him in front of her face, especially to avoid crying on long distance car journeys. I told you parenting is glamorous.

Where from in Dubai? Marcel (Ted) was actually from Sainsbury’s in the UK, but I’m sure you can find similar toys in Babyshop, Bumblebee and Mothercare in Dubai.

What? My sister leant me a TummyTub – which is basically just a bucket but for some reason makes babies go weak at the knees when it comes to bathtime. It was designed in the Netherlands by childcarers to ease the tranistion from the comfort of the mother’s womb – babies automatically adopt the feotal position in it. Maddie was so relaxed in it as a newborn that she used to quite regularly fall asleep, and it was a sure fire way to stop her from crying.

Where from in Dubai? I’m yet to find a Dubai stockist, but it’s available from Amazon.co.uk – you could Shop and Ship it to Dubai.

I'm Rebecca, lover of words, carbs, cake and coffee, sleep-deprevation survivor, Mum of five-month-old Maddie and wife to Ash. I've been living in Dubai for the past two years, working with words on a daily basis in my role as a Communications Specialist. I set up this blog after I struggled to find good, unbiased sources of information about parenting in one of the Middle East’s most exciting cities.